Vincenzo’s 16th episode begins with Vincenzo being held at gunpoint for the murder of CEO Oh. Unfortunately, the officers got a call from Oh himself, accusing Vincenzo of kidnapping him. Vincenzo fights back by knocking the officers down, releasing himself from his handcuffs, and escaping. He jumps downstairs and into Hong-Sik’s car.

Meanwhile, up in the stairwell, Seok-Do runs into the attacker, and the two face off. Seok-Do is knocked out, but luckily Soo-Nam is nearby to assist him. Seok-Do meets up with Cha-Young after having to fend off the man, and they question him and demand that he reveal who hired him.

They eventually take him to Vincenzo, who is situated near the docks. Vincenzo tortures Seok-Do in the backseat of his car and eventually identifies his base.

Vincenzo grants Seok-Do a wish as a token of his gratitude…which is later revealed to be his business model. For the time running, it’s back to the base, where Vincenzo and his mates snatch the men and take them to the police station to clear Vincenzo’s name.

Park Do-Hun is immediately arrested for Oh’s murder as a consequence of this. The officers arrive at Babel HQ to arrest him, which triggers Myung-Hee to become angry. She isn’t the only one, though, as Joon-Woo struggles to keep his calm and eventually starts throwing around the room.

Cha-Young takes Gyeong-Ja out for a photo shoot later that day, ensuring Vincenzo and her get some pictures together. Following that, Cha-Young encourages Gyeong-Ja and Vincenzo to spend time together, with each of them speaking in the third person about their feelings. It’s a heartwarming moment that brings them ever closer together. She also reaches in and gives her son a huge hug when Vincenzo drops her off at the hospital. 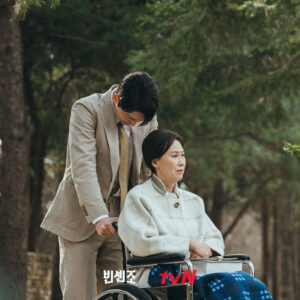 Back at Babel, Joon-Woo and Myung-Hee discuss Vincenzo’s potential use of the Guillotine File to gain control. Joon-Woo decides to respond by following Han-Seo to Geumga Plaza, where he takes a picture, claiming to be capturing a part of history.

Back inside, the group is excited to learn that Cheol-Wook is expecting a child. Things, on the other hand, take a turn for the worse outside. Myung-Hee is standing with an unusual remote control unit that manages to turn on the gas inside the house. Firemen rush into the house, sirens blaring, and warn everyone to evacuate due to a gas leak.

As firefighters rush inside, they find that the gas pipe has been severed. Worse, the remote-controlled watch inside was about to go off after just 5 minutes. Except for Vincenzo’s fast thinking and tossing it out the window, this would have killed everyone inside.

Myung-Hee returns to Babel with an important message to deliver. She hands Vincenzo a file containing pictures of his mother. They’ve got her back. So, Han-Seo appears at Geumga Plaza and proudly displays his scar, which he received from Joon-Woo. Han-Seo was the one who called the fire service and confirmed the gas leak, as it turned out. They eventually thank him, and the team finally allows him to go in and alphabetically arrange their documents. It’s all those baby steps!

Meanwhile, Myung-Hee drops by the prison to pick up Kang Ho-Chul, who has just been released. This is, as we’ll see shortly, the same guy who murdered the informant previously. Joon-Woo arrives at the hospital during their conversation, ready to turn Vincenzo’s mother against him. It’s just a short conversation, but it’s one with a mysterious undertone.

Ho-Chul shows up that night, posing as an orderly. He goes into Gyeong-room Ja’s and squeezes her out. Ho-Chul takes off as the heart monitor goes down. Vincenzo is visibly upset when he arrives, but anger consumes him as he desperately searches for those responsible.

He sees Ho-Chul going downstairs while checking the CCTV. Vincenzo’s rage is shared by Cha-Young, who tells him to leave while she remains with his mother for the time being. Vincenzo goes out with a silenced gun and tracks down Ho-Chul, breaking into his apartment and forcing the man to surrender. He repeatedly kicks Ho-Chul, finally sitting over him while tied down to a chair. Vincenzo reveals that the woman he killed was his mother. Meanwhile, Myung-Hee criticizes Han-Seo for meeting with Seung-Hyeok and doubts their commitment to each other.

Ho-Chul rushes into the living room, where Vincenzo immediately shoots and kills him. With blood on his hands, Myung-Hee lifts his silenced pistol and prepares to shoot.

I discussed the pendulum before, and it appears that it has actually moved to the direction of more serious drama. While there are moments of comedy, Vincenzo is much more entertaining and engaging when the show focuses on its darker and grittier plot. This is yet another fantastic episode, one that leaves more than enough room for next week.